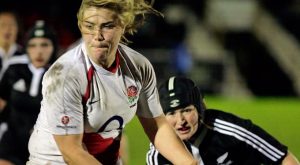 Catherine Spencer is a former captain of the England Women’s rugby team, leading the players at the 2010 Women’s World Cup in England.

A highly respected and well-known figure within the rugby world, Catherine has written articles for a number of leading publications including The Independent on Sunday, Sports International Magazine and The Sunday Times as well as rugby specific publications such as The Rugby Paper and Scrumqueens website.

During her 12 years of elite level playing experience, Catherine collected 63 caps for her country from 2004 to 2011. In this time, she played in two Rugby World Cup finals, unfortunately losing out to New Zealand on both occasions, scored 18 tries for England, was presented with the England Player of the Year award in 2006 and in 2011 received a Rugby Writers Club Special Award.

After retiring from international rugby after a sixth successive Six Nations Championship win in 2011, Catherine has continued to be a patron of the Tag Rugby Trust which coaches the sport to underprivileged children in developing countries across the world, a role she has held since 2007, and in 2014 launched Inspiring Women, a speaker and mentoring agency which uses female speakers who have a background in sports or adventure.

Catherine is also a regular commentator and studio pundit for Sky Sports and the BBC, and is also a popular figure on the after-dinner speaking circuit.

With a number of years of top-level playing experience, Catherine talks openly about her love for rugby, the growth of the female game and her achievements as England captain. Providing a great balance between the serious and emotional moments of her rugby journey with a number of light-hearted anecdotes, Catherine is sure to have your audience captivated and inspired.

To book legend of rugby, Catherine Spencer, to make a personal appearance at your corporate event or conference contact Teetopin by emailing golf@teetopin.co.uk or by calling a booking agent directly on 0844 884 9934.