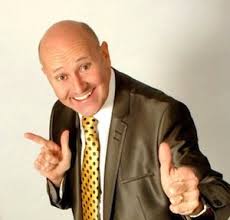 Booking Jed Stone for your Corporate and sporting Golf Days is an absolute must and can seriously damage your swing through laughing.

Jed is also proud to perform and play on Golf Days for such amazing sporting charities as Sparks, Wooden Spoon and The Variety Club of Great Britain Golfing Society of which he is a member.

Jed is proud to be a Founder Member of the Leeds United Foundation Golf Society, whose President is Colin Montgomerie, Captain Dominic Matteo, Vice Captain Andy Couzens, and a committee that includes Steve Cooke and Justin Edwards. The Foundation raise thousands of pounds for fantastic local charities through their amazing Golf Days.

Golf with a giggle is the best way to describe it. Jed plays off 24 at the time of writing and is a full member at The Southport Old Links Golf Club.

Jed loves to play if required; he will host the event, perform the awards ceremony and prize giving, and conduct his own hilarious auction to raise money on the day as well as doing his comedy act.

He is also perfect for a Captains Day, a golf club social event, or competition day

To book comedian, Jed Stone, to make a personal appearance at your corporate event or conference contact Teetopin by emailing golf@teetopin.co.uk or by calling a booking agent directly on 0844 884 9934.