We are delighted to be able to offer this amazing opportunity to purchase a great quality golf ball marker and pitch repairer set including: 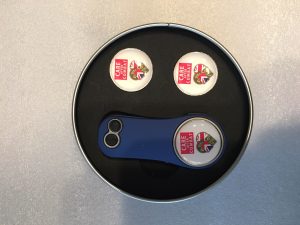 £5 from every order goes direct to the Charity “Care After Combat”.

What do Care After Combat do?

They work with a project called Phoenix, which is regarding Veterans in the Criminal Justice System

‘Phoenix’ is the name of the project to reduce the number of re-offending veterans released from prison.

During 2014, the Government undertook a review of Veterans within the Criminal Justice System published in December 2014.

Project Phoenix (Phoenix) has been operational since May 2015.

Mentorship is introduced during the final 18-months of sentencing and continues following release, the latter, for a period of no less than 12-months.

Inclusion criteria are Veterans in the final 18-months of sentencing.

All Care after Combat mentors have undergone formal training, initially validated by the National Offenders and Management Service (NOMS) and upgraded quarterly as part of their ongoing professional development.

The results of the current mentoring intervention are remarkable with an absence of re-offending in the sample group.

We have achieved a 100% success rate.

The key benefit of Project Phoenix is, of course, to the lives of the Veterans and their families, but there are also significant benefits to wider society, not least the financial savings of diverting them away from the criminal justice system.

There are no reviews yet.