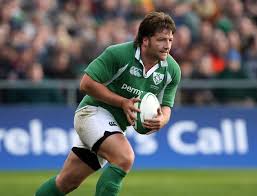 James Shane Byrne (born 18 July 1971) is a former Irish rugby union hooker. He is nicknamed ‘Munch’ or ‘Mullet’ (a reference to his hair style).

A native of Aughrim, County Wicklow, Byrne played Gaelic football up to under-16 level with the local Aughrim club.[1] He attended Blackrock College in Dublin.

He plied his trade for many years at Leinster. His international career started comparatively late and did not blossom until the retirement of Keith Wood. When he eventually got his chance in a World Cup qualifier in Romania in 2001 he took it and thereafter became a fixture in the national side where he won 41 caps between 2001 and 2005, scoring three tries.

In February 2003 Byrne played his 100th game for Leinster.

In 2005 he was selected for the British and Irish Lions tour to New Zealand and played in the first and third tests. Byrne has scored a total of three tries for his country, scoring two of those in one match against Wales during the 2004 Six Nations series.[2]

Following the Lions tour his contract talks with Leinster were inconclusive and he joined Saracens in the summer of 2005 for two years, before returning to Ireland.

To book Shane Byrne as the rugby speaker for your corporate event, function or conference, simply contact Teetopin by emailing golf@teetopin.co.uk or by calling a booking agent directly on 0844 884 9934.